Back in 1996 5 Boro launched as a line of boards as opposed to one board but after talking with Steve Rodriguez I found out that the ‘Yellow Logo’ was the first sample he received so I thought that seemed like the deck to focus on for The Hall of Fame. Steve like a lot of us hails from [En-Jay] where all things east coast great and skate seem to claim some origin or connection. We all have similar Histories and stories with regards to NYC and skating. Such as taking the train or the Bus in, collecting toys from Children’s of Paradise, tofu Chilli dogs from Pupp’s place, heading up town with our skates for some other reason like a comic conventions and discovering a wealth of new skate spots, punk shows at The Ritz  and of course hanging out at the Brooklyn Bridge banks. It seemed like everyone was from Jersey hanging out there. I personally never really accomplished much when it came to street skating, couldn’t ollie a bottle cap but I remember thinking back then there were two types of street skaters those who can get over that damm divider and those who could not…Steve was one of the ones who could. 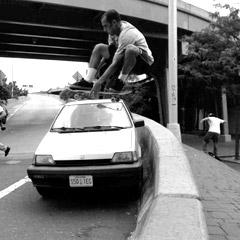 Its now 15 years later since he founded the aptly named 5Boro and the brand is still going strong. Steve has evolved into a major voice and consultant to skating and the people entrusted with decisions about skating in the actual Five Boroughs which is fine by me. So check out 5Boro today and dont be surprised if you are casting a vote for Steve R as Mayor of NY someday.

PS: As always if you have one of these gems send me an email pic, you earned the right to brag about it! I will add it to the post. Also feel free to leave some comments below about Steve and the brand as well. 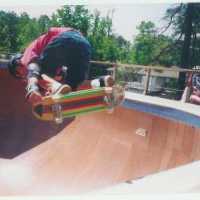