Mark Emond in the Bowl

Josh Marlowe in the Red

Great video…Anyone remember this being filmed and who is skating in the OC part?

Barely anyone has watched these vids on YT… I think I am responsible for half the hits. The whole thing kills…lotsa Miller and Tony Magnusson too…Crazy music as well….anyone wanna comment on the people and places feel free. Is that Gator in the black? and who is in the red doing the tuck knee invert? 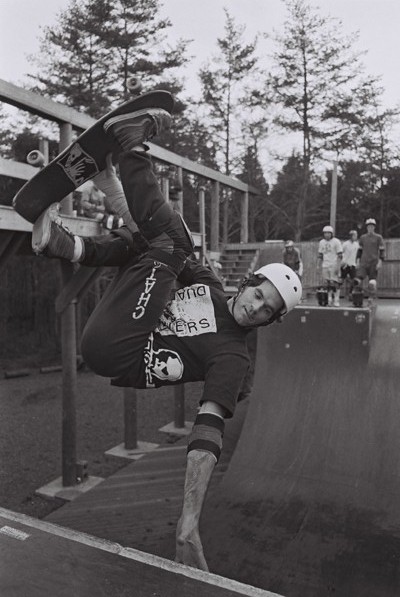 So I totally dig this photo… Can’t say I know Josh although I skated/photographed at CCCC and OC Maryland on 2 occasions that he was there. So I figured If I was going to post something of him maybe ask someone else to say something about him.

….so I asked Rob Mertz and he said…I quote

Josh is a big dude. He’d throw up a tucknee invert and his knees would be higher than my head!

Well there you have it. What more to say? Josh Marlowe a huge OC legend…Nice to be remembered!!

Anymore comments or pics of Josh send em are way.

This will be the first of what I hope will be many more articles by John C. Egertson. This one is about Pat Clark who I remember because I skated CCCC and also went to University in D.C. in the late 80’s and early 90’s. I honestly recall the band Coathanger Delivery which I was surprised to find out after reading this he was the drummer…too cool Pat…too cool.

P.S. If you have any “Superb” pictures of CCCC, Annondale, and Trashmore please send them to me (Jasonoliva@gmail.com) ASAP you will have the opportunity to see them included in genuine skate mag print within John’s latest article ….SO if you got em send em quick! 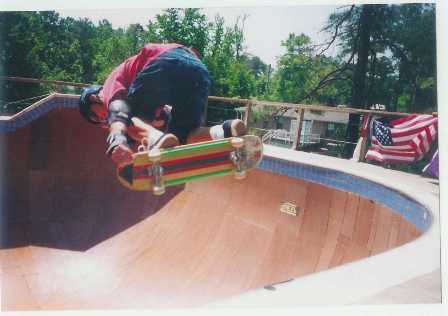 I think it was around 1978 or 1979. Skateboarder Magazine was sacred, and skating was all that mattered. Dreams began coming true for skaters in the Washington, D.C. area when the first wave of concrete skateparks were built. The first two, as I recall, were in Gaithersburg, Maryland and Springfield, Virginia, but they were very poorly designed. Much better parks came along close behind, and they were good. Damn good. Skateworld Skatepark in Alexandria, Virginia had moguls and half-pipes and the holy grail for Dogtown wanna-be’s like myself, a pool. Another killer park was constructed in Crofton, Maryland.

At Skateworld, the team members were idols, and they could seriously rip. Names like Miles Rolf and Connor Mulroney come to mind. But there was one kid who came down from Crofton to compete in Skateworld contests, and he consistently left our local heroes vying for second place. His name was Pat Clark. Pat’s runs in the Skateworld pool are burned into my memory. Pat could blast the highest airs, carve the longest grinds, find the best lines, and turn in the most flawless runs imaginable. He seemed to never fall. I would watch Pat skate and I honestly couldn’t believe that anyone in California or anywhere else could possibly be any better. That was my introduction to Pat Clark. He was all of 15 years old. But that was 1979. Pat is a veteran now. The reason I’m writing this article is that Pat represents what skating is truly about. He has ripped for over 25 years now, and counting. Pat hasn’t ever made a lot of money skating. He’s in it for the love of the sport, and take my word for it, he’s not lacking in talent. I have put Pat on my list of east coast skateboard legends. 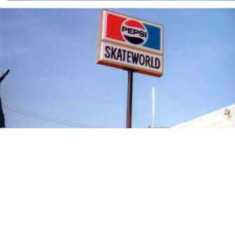 The sign at the long-gone Skateworld Skatepark in Alexandria, VA

I was skating a ramp in Culpeper, VA recently and met an old school skater who had just returned from Nags Head, North Carolina where he saw “a guy named Pat Clark absolutely killing it” at the YMCA park down there. Just the mention of the name Pat Clark brought back a flood of great memories, and I was inspired to track him down and write this article. I don’t know Pat personally, but his name comes up whenever skating in the mid-Atlantic region is the topic. As it turns out, he was pretty easy to find. A quick search of the white pages online and a few wrong numbers later, I found the Pat Clark I was looking for. I initially reached Pat’s wife, who, when asked if her Pat was an avid skateboarder, responded, “Yep, that’s my husband.” The following interview should give you some insight into who Pat Clark is and why he deserves some serious accolades for what he has accomplished. He’s a heck of a representative for our sport.

Q: So Pat, let’s get the formalities done first. I talked to your wife on the phone, so I know you’re married. Any kids, and do they skate?

Yes, I am married. My wife’s name is Carolyn, and we have a son, Ryker. He’s 18 months old and has been skating for 17 months!

Q: I’m guessing you were about 15 years old when I saw you at Skateworld. How old are you now?

Q: And you grew up in Virginia, right?

Q: Was Crofton kind of your ‘home’ park?

I was sponsored by Airflow, and they owned Crofton.

Q: Alright, let’s start way back and move forward. I found a photo of you doing a picture perfect invert at Skateworld, and it had to be one of the earliest ones. Did you just see a picture of Bobby Valdez in the magazine and then go for it, or what?

My brother Willy was the first person I knew who could do one, I did one a week later.

Q: After they bulldozed Skateworld, we all started building ramps. What about you, where did you take your talents, and tell me about the 1990’s when vert was dead.

We had a half-pipe and a ditch in my backyard, and around that time Mark Hooper built Cedar Crest with Mike Mapp. I was also in a metal band that was part of the D.C. skate scene. We were called Coathanger Delivery. I was the drummer.

Pat doing an invert on his backyard half pipe, 1978 Photo by Bobby Fulk

Q: Have you ever quit skating for any extended period?

No. (I already knew the answer to that one…)

Q: Are you purely a transition skater, mostly vert, or do you street skate – I guess Nags Head is a little lacking on hills to bomb?

We have one hill, so it’s all roundwall for me.

Q: Do you still compete a lot?

Just locally, however I still aspire to beat Duane Peters.

Q: List for me some recent contest wins you’ve racked up.

I tied for 1st with prodigy Packy at the 2005 Roundwall Roundup, and took 5th at the 2003 Virginia Beach Soul Bowl contest against Dave Duncan and lots of other great skaters. 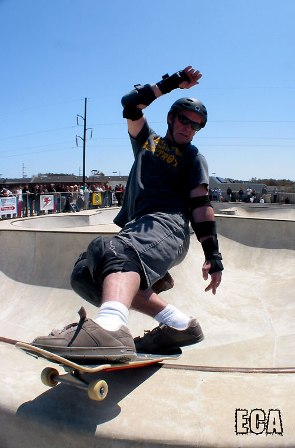 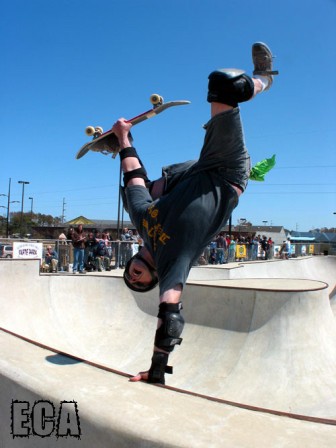 Q: You’ve got a YMCA park in your town now that’s pretty hot, one of the only Grindline designs on the east coast I think. What’s your take on the new wave of concrete parks? Do you prefer ramps, or pools over the new parks?

Pools rule and parks are cool as long as it’s vert. The YMCA park in Nags Head is awesome. Grindline did a great job even though there isn’t enough vert.

Q: Did you ever make any real money skating, or has it been primarily just a passion, don’t quit your day job type thing?

The closest I came to full time skating was earning 600 dollars a week around 1988 doing a skateboard show in Tennessee.

Q: Do you have any current sponsors? Past sponsors?

Grind Syndicate and Nags Head SK8 are my current sponsors. In the past, I’ve had Belair Boards, Airflow, Gullwing, Independent, and Walker.

Q: What kind of set-up do you ride? Are you riding a wide deck with an old school feel to it, or staying modern?

I’m currently riding an 8.5 deck with Indy 169’s and nothing but Type S wheels.

My worst accident was at Cedar Crest in the early 1990’s. My wheel fell off on an invert. I hit my head and went into convulsions, it was pretty sketchy, I bit Josh Marlow’s finger while he was trying to help me. I learned the hard way to always check my board.

Q: The scene on the Outer Banks seems pretty vibrant. Has it been that way for a long time? How long have you lived there?

I’ve been living here in Kill Devil Hills, NC for about ten years. I love it – beach life with plenty to skate. The skate scene here on the Outer Banks has really blown up, 3 pools, 1 park, with two more being built, and Mark Corbett’s skate sensation, the Cheese Bowl. 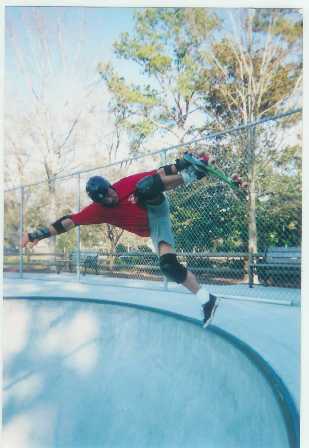 Q: Anything else you want to say, or anyone you want to thank – maybe your wife for supporting your skating at age 41?

Yeah, definitely, my wife Carolyn and son Ryker for supporting me and being my number one fans. Also my Mom and Dad for letting us build a half pipe in our backyard and opening a skate shop in the 1970’s. My brother for always skating better than me and of course Bruce Walker.

Pat, I want to thank you for talking to me. It was an honor to interview a skater of your stature. You’re a truly dedicated skater – people like you are great ambassadors for the sport. Keep skating, and good luck nailing down that Advil sponsorship!

Lotta heavy hitters at this session, I bowed out early to take photos.

Dan Tag, Fred Smith, Josh Marlowe on deck if I recall Bernie O’Dowd and John Ballon may have been living in OC at the time….

Anyone out there that can date this one I would appreciate it.

more photos from this session in the near future…

checkout all the boards at our skateshop

CLICK HERE FOR The TEAM STEAM 1987 PHOTO ANNUAL.Click for your copy of Rising Son and support The House of Steam!!
jason oliva