By rights, I should have met Jay Henry years ago. Being from the same
state and having skateboarding in common. But things sometimes are
not that concrete, no pun intended. Fast forward to the year 2008 and
I find myself in New York City at the release party for the Rock Star
Bearings video, looking over the large group of new, rookie pros that
are currently dominating New York and the world, sipping free drinks
and keeping to myself.

I had e-mailed Jay to let him know the party was going on and he
responded that he and VA Beach legend John Fadula might swing by.

Somewhere about 11:30 pm, a face turned the corner and yells out,
“Derek Rinaldi?” I immediately responded, “Jay Henry?”

I asked him how he knew it was me and he said, “I walked in and asked
the oldest dude at the bar where Derek Rinaldi was…he pointed right at
you.” Jay Henry is obviously a comedian as well. The rest of the
night was spent re-hashing war stories, road stories…jersey stories.

So the Jay Henry mystery is solved. The guy that was always around
way back when. The dude that you always ‘just missed’, or ‘was here
yesterday doing this trick or that trick’. The barn/ steam/ groholski
crony, now has a voice. One more face off the wall.

It became apparent that I did in fact know Jay Henry all these years.
I just hadn’t met him yet.

this last pic was taken before i knew jay was there…funny huh, he was looking for me 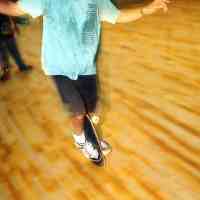