Its funny just as Mike V is on an Epic Zumiez appearance tour I receive some great picture’s from Jeffrey Turko, back in the day owner of Earth Surfer Skate shop in NJ. Jeff and Earth Surfer were responsible for bringing a tremendous amount of pros to NJ (but The Earth Surfer Story is for a later larger post)  Couple things to take away from these pictures besides the obvious…..

Check out the Board prices in the first pic…$45.99! Board prices have not budged in 20 years…were did we get the money back then to buy so many. It could be the equivalent of paying $200 for a board today ( I will let our financial experts do the present value calculation on this one)

The other thing is Mike V as a brand…he has ascended to the ranks of something like Harley Davidson…when people make the commitment to tattoo your logo on their bodies! they are not likely to change their decision in becoming a fan for life. Its all well deserved though Mike is out there on the front lines inspiring several generations across multiple artistic and athletic disciplines. Great guy to have on your side.

Check out Mike V online to see a lot more pics from this 2010 Shop tour on steroids. 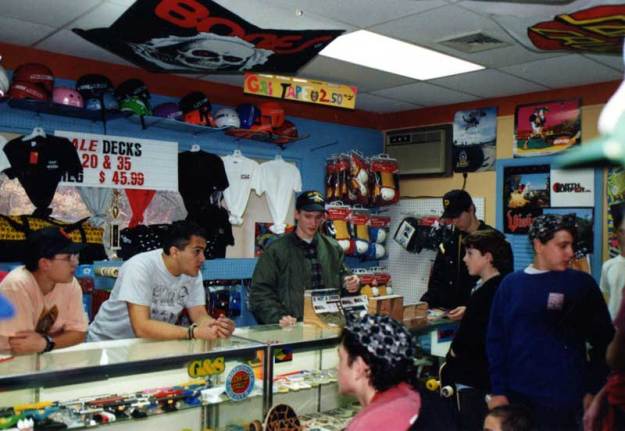 That’s Jeff with his elbows on the counter.

Remember those plastic bags that Rector pads came in?

I had one of those finger board ramps too. 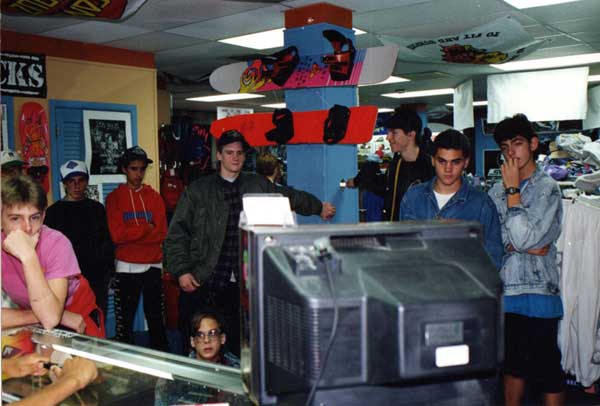 Symmetrical snowboards were still a couple years away I guess.

Here are two faces to names you should know:

Larry Ransom rocking the Skate Daily Tee shirt. Larry is the man behind the scenes that helps Mike V do the things he does. You can check out a lot of Larry’s killer video work over at LarryRansom.com as well and read his writings on MikeVallely.com. Along side him is our very own Derek Rinaldi you can check out his contributions all over the web: THOS, SkateDaily, Totally Skateboarding and Stereo Sound Agency…follow his writings before skateboarding makes it into the Olympics and ESPN makes an honest man out of him.

Big Thanks to Chris, Bryce and Derek over at SkateDaily for making us site of the week and also bringing attention to The new McRad board.

Here is the killer banner they made for us:

SkateDaily has been a great supporter of THOS all these years and its just as much a thrill being up on the site in 2010 as it was back in 2006. So if you have not been to SD head over and check em out they offer the most in depth skate news on the internet, full stop.

DIY is not just a phrase to be thrown around, it’s the very foundation of skateboarding. DIY is what created skateboarding. The term multi-use may not have been created by skateboarders, but we have found a way to perfect the concept. Benches, ledges, railings, and pools were all designed with specific function. Skaters had their own ideas.

The world is a playground, you just have to have know how to use it.

Most skate spots carry a shelf like similar to milk, so it’s best to get on them enjoy them for as long as possible. It’s rare that spots become heirlooms, to be passed down for generations. Manicured and added down as time goes on.

Yards from a Pennsylvania Interstate but miles from anyone’s radar sits one of the best skate parks that was never designed for skateboarding. It’s free, you don’t have to wear pads, and you can listen to Mercyful Fate as loud as you want.

For years skaters have been riding the bowled, concrete water spillway that is the Dust Bowls, adding simple nuances here and there, QuickCrete, angle iron, parking blocks etc.

Having been designed for one purpose and refined for another while never jeopardizing it’s original function. You can call it multi-use, you can call it adaptation. But it’s just skateboarding. And it’s just perfect.

Too cool…looks like yesterday as opposed to a decade ago. I still have my Thrasher Skate Mag Cassette knocking around as well.

Rumor has it Derek can do some frontside marvel  on one of those walls.

I have never met NJ hometown hero Chris Pastras but regardless I  dig the style and aesthetic he has created with Stereo Sound Agency. Like the Rat Pack in Salvation army clothes walking resevoir dog style exiting a private jet onto a tiki bar laden island in the sixties….in full color. Thats sorta how I see it. Forget the center… move way over and create a new center, thats how I dig it and and they live it.  Our favorite son Derek Rinaldi has begun to contribute over on the Stereo Sound Agency blog and me-thinks you should check it out. 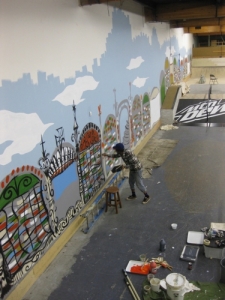 and all things Stereo.

Derek Rinaldi doing one of  those things he can do.

something about the music and the repetition…coolness

Here is a great picture of the DR doing something magical from Todd Laffler’s epic Fish*Eye Numero Uno. Besides being pretty darn cool this sequence reminds me of those worthless trick tip articles.  The trick would be an egg plant with pictures of someone cool like Dan Wilkes and the captions would read….drop in and approach the wall with a moderate amount of speed …pump the transition and as you approach the vert grab your board with the opposite hand that you would use to do an invert ….now reach for the coping invert your body extend then compress let go land back on the ramp….then the inevitable……NOW PUMP AND DO ANOTHER…too ridiculous. I have tried to get Pump and do another into the everday vernacular of life but it never would stick and in most cases it sounds like a sexual innuendo. Next time you are done instructing someone finish by saying “Now  pump and do another” …also if you can scan a ridiculous trick tip please email me one all my mags are in temporary storage. Most of them should just read….drop in with the trick in mind…spazz your body around in some semblance of what you imagine it would need to be doing….bail and slam enough times until the enlightenment of the fact that it is  less tiring and alot less painful to just go ahead and land the trick…..THEN pump and do another.

Now as for Derek…approach the transitioned street obstacle with a blazing amount of speed…. utilise a lifetimes worth of hard work and practice in order to ollie ridiculously high…..take your front foot off the board and then replace it before landing….Now pump and do another.

Also Derek has landed (no Pun) a photo in the upcoming Full Bleed:New York City Skate Photography it is a picture of a gentleman who is well represented in our archive:

As far as Full Bleed:New York Skateboard Photography goes I do not know the peeps personally behind it but I am familiar with the peeps behind the peeps and that is the distributer PowerHouse Books in D.U.M.B.O. The place is worth a trip over the Brooklyn Bridge, have lunch at Bubby’s too and send me an iphoto of some pie! PowerHouse is an amazing Independent art/photography book distributer and book store. Its one of those NY places that you can spend hours milling around in and sometimes a band will be performing. So check out Full Bleed and then inundate PowerHouse with email requests for a THOS Book!! Great stuff!

Distributed by PowerHouse Brooklyn 2010 and Published by Vice

Great work DR..Click for more info/pre-order on FB:NYYCSP and PHB then pump and do another…

PS Guess who that is on the cover?

PSS No its not me

For the last 3 years or so Derek Rinaldi Shut riding force of nature has been THOS’s imbedded reporter and liaison to all things East Coast skate. Well he has been officially pinched from us by Bryce Kanights over at SkateDaily.net and I for one am happy for DR and BK.  I dig DR and everything BK and his partners do over at SD….A rising tide lifts all ships!!

Thursday July 16, 2009 : 07:21 AM
Derek Rinaldi Joins SkateDaily.net
He’s already up and at it, so without any further delay we’d like to properly introduce and welcome our east coast correspondent, Derek Rinaldi to SKATEDAILY.net’s growing news squad. Derek hails from, New Jersey’s deeply rooted skate scene, was a member of the Edison’s “Noside” Posse and is one of NYC’s original SHUT team riders. Importantly, he’s armed with skate history and continues to live and breath skateboarding true east coast style.

Feel free to give him a shout via: derek@skatedaily.net.

Man, me and Derek really got our money’s worth this weekend! We cleaned, skated, drank, swam and grilled all day on the 4th at Fight Club with rooftop access to watch the fire works. 5 bands played, and Rube from Richmond Virginia really rocked the house. Then Sunday we finally made it down to the American Indian Museum, and got to watch the demo. Then it was off to Green Skate Lab for a session with JC, Tommy and Derek. I was too tired to skate but took some great pics which I will send in soon. After the session we met up with Steve Teig at his new bar in Georgetown (Bread Soda), and drank some good beers, had some great food, and got schooled at pool by Steve himself. Here’s a couple of old men skating the punk ramp at Fight Club; Derek Rinaldi with a hefty backside ollie disaster (photo Henry), and who knew Jay Henry could do a crail? And it’s a big one! (photo Rinaldi) 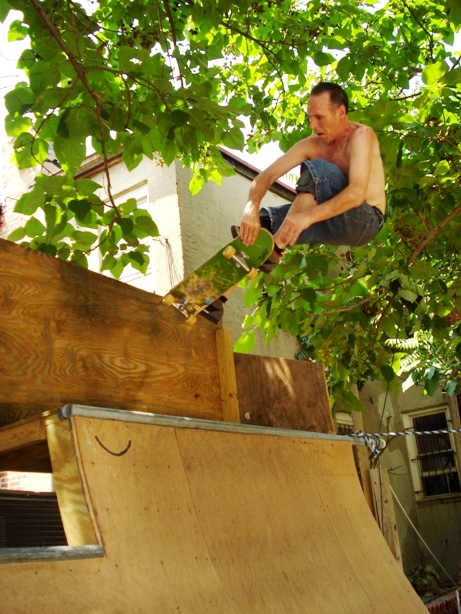 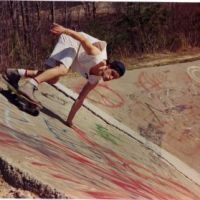