How vintage is this!! Thanks MS for this one. Mike V back in the day at The Barn.

You rule Mike!!! Thanks for all you support of The House of Steam!!

..its nice to have a bodyguard. 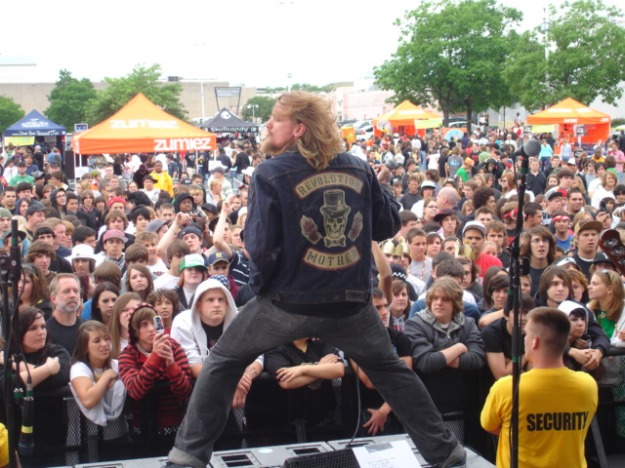 Ah, I remember that day well. Cold as a witch’s tit in the Barn. I can still recall pulling the trigger on that shot and thinking “holy shit, I think I caught it”! Being the pre-digital days and a grom with no money, it would be a few weeks before I would get the prints back and show them to a psyched Mike V. Not sure if I gave him a copy back then, but I attended one of his demos at Charm City skate park in Baltimore in 2004 and gave him copies of that shot and others. The look on Mike’s face was priceless and similar to the one he had when he pulled off that first vert invert and when he saw the print for the first time.

My introduction to the central jersey skate scene began when I got a job at Freestyle Surf Shop in Woodbridge Center. My manager, Rodney Smith (SHUT Skates!!)set me up with my first rig, Sims Screamer, that I ticked tacked all over the store, house and parking lots every where. From day one, Rodney took me (and others) under his wing. He didn’t care if you couldn’t keep up with him or what tricks you could or couldn’t do, it was “just skate man”, “have fun”. That’s what we did…

One day, Rodney tells us of some ripper groms in Edison that we should go skate with. We roll up to some parking lot across from Tops Appliance and jam with these bros for hours and hours. They all ripped! There was George (G-force) and Mike Dehr, Al, Kevin, Don and of course this skinny blonde kid with shins that were bloody knee to ankle named Mike V. That blonde kid stood out as far as talent goes, but those other guys were no joke. Don (sorry, forget the last name) was sick. He and Mike would go trick for trick while the ‘no ways’ came from the rest of us. 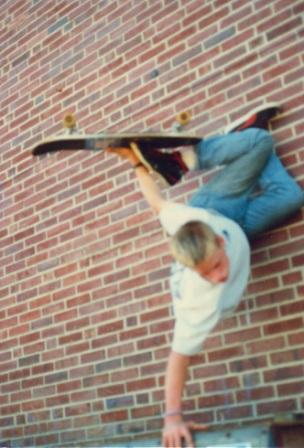 Some of the best times (for me) were when we piled into mine and/or Rodney’s cars and would drive to the river banks at Rutgers. After spending hours there, we’d hit some downhill in the close by parking garage before tormenting the crew at Stuff Your Face or the White Rose late night. Every once in a while Murph would come down from his dorm and be joined my Tommy G. and Chuck to session with us at the River Banks. I can’t speak for the rest of the guys, but when those three joined us groms the excitement level and pure fun of skating elevated to levels unknown.

Many more memories/stories from those days at the Barn, Tommy G’s ramp, Spotte Banks, the Ditch as well as our trip to visit Mike V. in Va. Beach and getting chased by the feared Va. Beach Ninja Gang, that will have to wait for a later day.

Jason, your site rocks! At 40, I am as passionate about skating as I have ever been. I was never the most talented skater, and am not able to get out much with the exception of hitting Lansdowne for an occasional carve, but I love skating to my core and your site has brought back so many memories! Keep it going!

One side note: I never knew Weep while growing up in Jersey during my skating days. It was not until I moved to Jackson Hole, Wyoming to snowboard for a couple of years. I able to hook up with him after Rodney gave me his contact info. DJ King Weep rocked the Valley and was (and still is) loved by so many there. I would stroll into Mountunes where he worked and he’d pass me on to the newest shit to ride to. My best Weep story was when we rode together one day and decided to hit Corbets Couloir early after a nice dumping of 6” the night before. We roll up to the ledge, I hit the goat path with one turn and I’m in. Two turns later in flat light, and I’m on my back head first doing a 40mph dealth slide for 300 yards down the Couloir finally coming to rest in Tensleep Bowl. I sit up, glasses frosted over inside and out, shaking and almost in a panic. Along comes the calm Weep stopping just uphill of me saying “that was sick” and his calm demeanor. Good old King Weep sat there with me for about a half hour (on a sick powder day) until I stopped shaking and was confident enough to stand a make a turn again.

Weep rocks! We rode the rest of the day and for the next two years we laughed about that every time.

Thanks for sharing…Mike Vallely, Rodney Smith, Weeps…all top on our list at The House of Steam.

Be sure to checkout SHUT’s website(cool interview of Rodney by Mike V) and see how Rodney and gang are going to revolutionize skating….again!